There's no doubt that drugs are often enticed to younger audiences in order to get them to either try a drug and then become addicts that come back to buy more, or to make them think that by taking drugs, they'll fit in, and not be rejects. According to "drugabuse.gov", younger teens seem to use inhalants, and older ones use synthetic marijuana and over the counter (OTC) or prescription drugs. Here are the results of a survey done on seniors in high school: 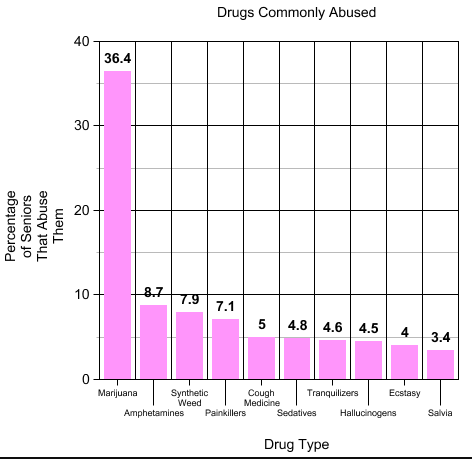 The ones in red are illegal, the ones in yellow are OTC or prescription. Marijuana is in Orange because, according to www.disa.com, it is legal for both medical & recreational purposes in 12 states (as well as DC), but in 8 other states it's completly illegal.

On the Bright Side


Although drugs are still very common in the world, and even in the world of young people, there are a lot of organizations that are helping combat this. The most notable one for people that are still in school is the DARE Program, a nationally funded program whose goal is to inform young people about the dangers of taking drugs, and how they can not only destroy your body, but your life as well.

Here are some of the websites that I used to create this one. They contain lots of good information on drug abuse, and I suggest that you check them out.

Seeking help is often the hardest thing for someone to do after becoming addicted to drugs. In 2015, a national survey was done, and it found that only 2.5 million people recieved treatment for their additctions. Out of a pool of 21.7 million people, that means that only around 12% of the population recieved treatment that needed it. Because of this lack of help, many people go untreated. This did not help the 88,000 deaths caused by excessive alcohol usage. An estimated 2.5 million years of potential life are lost annually in the US from things like that. 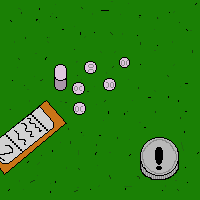 According to the CDC, in 2018, 67,367 people overdosed on drugs. So, about 21.6 in 100,000 deaths is caused by drug overdose. 14.6 of those, or about 68% are opoid related overdoses. According to a study done in 2015, on both male & female adolescents, nearly all overdoses were accidental. In another study done on teens aged 15-19, deaths caused by overdoses were the highest for opoids, most notably Heroin.

Why I Made This

I chose to make a website adressing drug abuse for a few reasons. First, we have all been affected by drug abuse in some way, whether it be a friend or relative overdosing, or you have previously struggled with it yourself. Also, I have lost family members to heroin overdoses, and have seen others ruin their lives with meth. Drug abuse is one of the worst ways a persons life can be completly flushed down the drain & I wanted more people to have a better understanding of how drugs affect minors.

Opiates have a long history. The mesopotamians grew fields of opium poppies in around 3400 BC. The Sumerians called the flowers “Hul Gil”, which translates to, the joy plant. Later, around 460-357 BC Hippocrates, the man known as the Father of Medicine, acknowledged opium as a narcotic. He would prescribe some of his patients nettle seeds mixed with White Poppy juice as medicine. That wasn’t the extent of it in the ancient world though, it grew and grew until the Arabs, Greeks, Romans & most of Europe used it as a sedative.